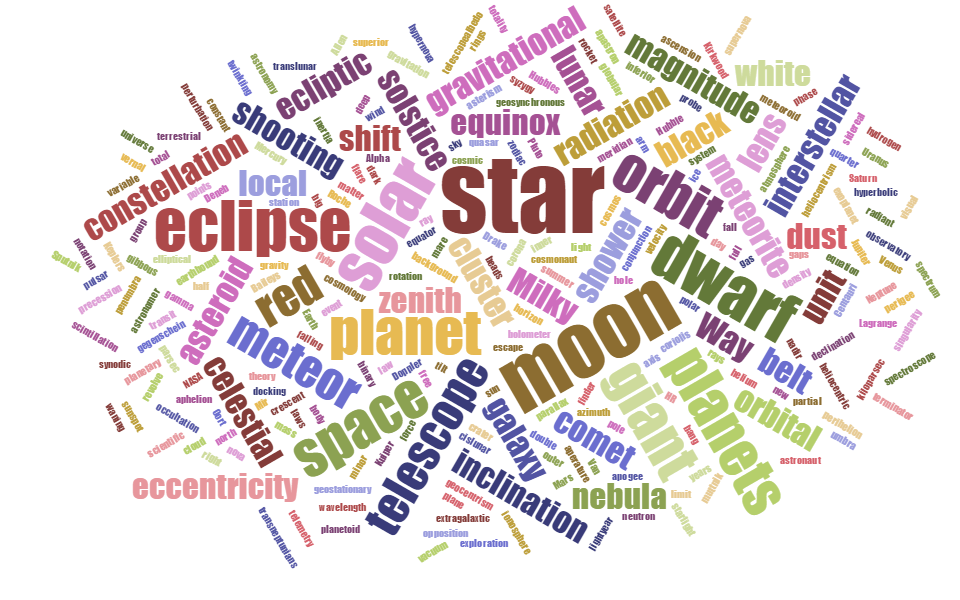 A day in the life: Astronomer

A day in the life: Astronaut

antipodal
Relating to or situated on the opposite side of the earth.

asteroid
Minor planets, especially those of the inner Solar System.

astronomical unit
The distance between the Earth and the Sun.

Astrophysics
The branch of astronomy concerned with the physical nature of stars and other celestial bodies, and the application of the laws and theories of physics to the interpretation of astronomical observations.

atmosphere
The outer casing of a planet or a star and which consists mainly of neutral gas ans ions.

axis of rotation
The center around which something rotates.

Big Bang
The rapid expansion of matter from a state of extremely high density and temperature that according to current cosmological theories marked the origin of the universe.

comet
An icy small Solar System body that, when passing close to the Sun, heats up and begin to outgas.

constellation
A group of stars projected on the sky that are close enough to be connected by imaginary lines, thus tracing a figure in the sky.

Cosmology
The science of the origin and development of the universe.

galaxy
A huge group of stars, dust,gas and other celestial bodies bound together by gravitational forces.

geocentrism
The description of the cosmos where Earth is at the orbital center of all celestial bodies.

heliocentrism
The astronomical model in which the Earth and the planets revolve around a relatively stationary Sun.

interstellar
Occurring or situated between stars.

light years
The distance that light travels in vacuum in one year.

lunar eclipse
When the moon passes directly behind the Earth into its shadow.

meridian
The half of an imaginary great circle on the Earth’s surface, terminated by the North Pole and the South Pole.

meteor shower
A phenomenon in which many meteors fall through the atmosphere on a relatively short time.

meteorite
A solid piece of debris, from such sources as asteroids or comets that originates in outer space and survives its impact with the Earth’s surface.

milky way
The galaxy that contains our Solar System.

nadir
The point on the celestial sphere directly below an observer.

observatory
A room or building housing an astronomical telescope or other scientific equipment for the study of natural phenomena.

orbit
The gravitationnaly curved path of an object around a point in space.

planet
An astronomical object orbiting a star or stellar remnant that is massive enough to be rounded by its own gravity.

planetarium
A building in which images of stars, planets, and constellations are projected on the inner surface of a dome for public entertainment or education.

polar star
A visible star that is approximately aligned with the Earth’s axis of rotation.

radioactive
Emitting or relating to the emission of ionizing radiation or particles.

radio telescope
An instrument used to detect radio emissions from the sky, whether from natural celestial objects or from artificial satellites.

spectroscopy
The branch of science concerned with the investigation and measurement of spectra produced when matter interacts with or emits electromagnetic radiation.

shooting star
A visible path of a meteoroid as it enters the atmosphere.

solar eclipse
When the moon passes between the Sun and the Earth.

star finder
Device such as a star map or celestial globe to facilitate the identification of stars.

summer solstice
The day when the sun appears highest in the sky.

telescope
An instrument that aids in the observation of the sky.

zenith
An imaginary point directly above a particular location.